Kosrae Hilo Congregational Church is a group of people who are, in word, together. We’re together with God because of God’s kindness and commitment to humanity. 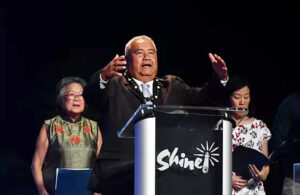 Nixon Jack graduated from the University of Hawaii in Hilo with a degree in Diesel Mechanic and Welding. Nixon was born in Popnpei and was raised on the island of Kosrae in the Federated State of Micronesia. He was ordained as a Pastor on July 1, 2012.

Pastor Nixon wants to see passion and energy being used to serve Christ. His heart is to reach out to youths and College students because he believes they are the future of the church and community. He is a Member in Discernment (MID) of the Hawaii Island Association of the Hawaii Conference United Church of Christ.

He is married to his wife Fay Jack and together he is the father of 8 children.

If you would like to learn more about the Kosraean Church and its history we want to recommend Island of Angels, by Elden Buck.

“Over the past 150 years, some foreign observers have referred to Micronesia’s Kosrae as an “island of angels.” The American writer Willard Price, for instance, used the term in 1935, citing the absence of orphans and needy elderly, the manner in which food was regularly shared with neighbors, the custom of wearing white one Sundays, the policy of no work on that day, and the non-existence of crime.

Elden Buck’s Island of Angels is a valuable history of the Protestant church on Kosrae, set in the context of the larger mission effort in eastern Micronesia. To give his history an important human dimension, Buck draws upon the writings of the nearly 50 missionaries who labored on Kosrae beginning in 1852. While Island of Angels is written primarily for Kosraeans, it will also find a receptive audience among readers interested in the Pacific. The volume is a welcome contribution to the history of Christianity in the Pacific and Pacific Islands Studies in general.”

Get updates on church news and events to your email. You can access our last newsletters here.